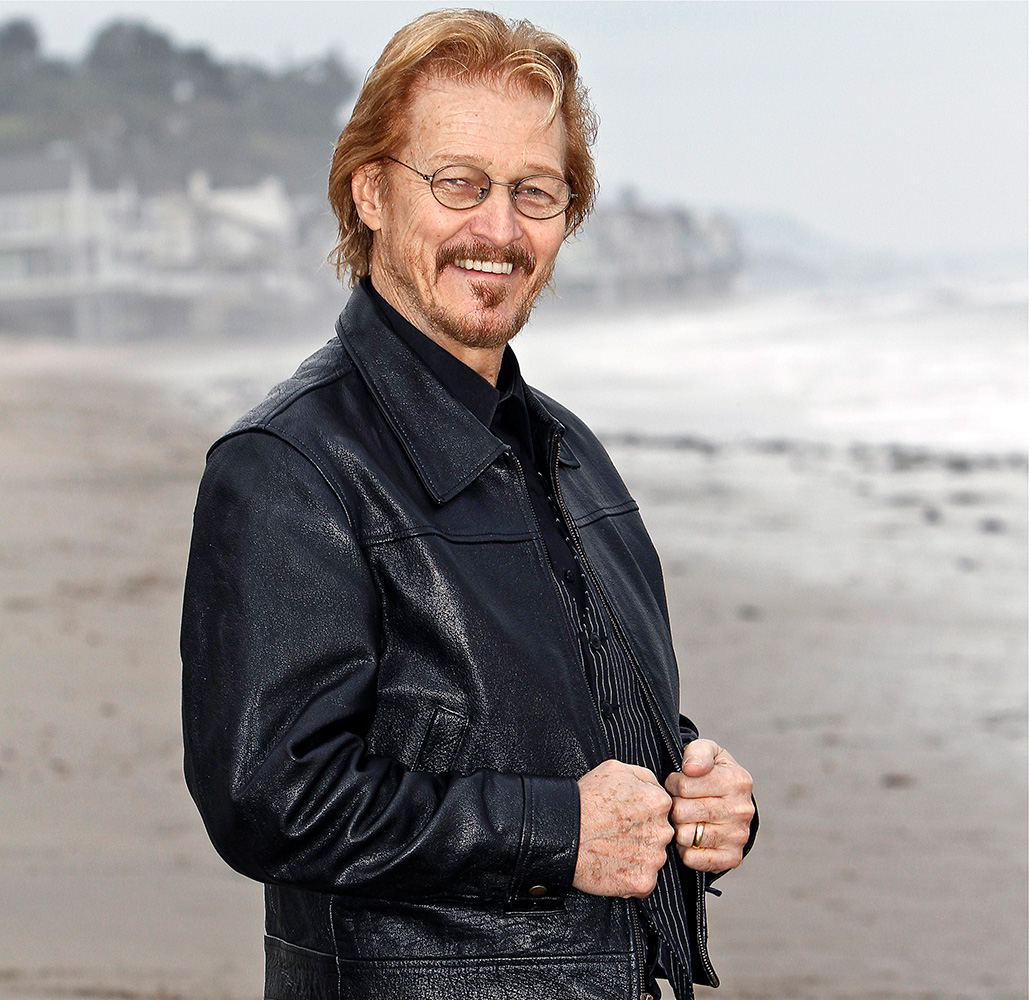 Born to sing, Ted Neeley began his career as a Teenage Singin’ Rock’n’Roll Drummer in his hometown of Ranger, Texas. He played the nightclub circuit extensively, until the U.S. Army Draft broke up the band for the Vietnam War. Once he breathed fresh air again, Ted became a singer/vocal  arranger, and worked with renowned artists, Ray Charles, Tina Turner, Richard Pryor, Robin Williams, Leon Russell, Richie Havens, composer/arranger/producer David Foster, Billy Preston, Neil Sadaka, Ben Vereen, Keith Caradine and Marvin Lee Aday aka: Meat Loaf. Neeley’s career took a unique turn when he landed the role of “Claude” in the Original Broadway Rock Musical, “Hair.” The iconic director, Tom O’Horgan, directed Ted in “HAIR” for three years. Then, he welcomed the now longhaired Neeley in the Broadway Premiere of the Rock Opera, “Jesus Christ Superstar” by Sir Andrew Lloyd Webber and Sir Tim Rice. There, Ted began in the ensemble, while understudying the role of Jesus of Nazareth.  His next amazing opportunity was performing the role of Tommy Walker in the World Premiere of The Who’s “Tommy” in Los Angeles. It was there he met and was interviewed by Academy Award winning film director, Norman Jewison.  Upon the completion of  “Tommy”, Neeley was awarded the title role as Jesus of Nazareth alongside his dear friend Carl Anderson as Judas, in Tom O’Horgan’s uniquely directed outdoor production of “Superstar Under The Stars” in Los Angeles at the Universal Amphitheater, which was built specifically for that show. During rehearsals, Mr. Jewison flew Carl and Ted to London and screen tested them together for the roles of Judas and Jesus. After reviewing all the potential actors/singers for the first Rock Opera to be made into a film, Jewison chose Neeley and Anderson for those two major roles. While on location in Israel, Norman guided and directed Carl, Yvonne Elliman and Ted into receiving Golden Globe Award nominations for Best Newcomers and Best Actors in this groundbreaking Rock Opera Film.

Fresh from the worldwide success of the film, came Neeley’s album, “1974 A.D.”  Then his dear friend and mentor, Tom O’Horgan, invited Ted to bring his Rock Opera wail to the role of  “Billy Shears” in the New York World Premiere of The Beatle’s, “SGT. PEPPER’S LONELY HEARTS CLUB BAND…On The Road.”  Neeley’s career has included multiple guest appearances on television’s, “The Tonight Show with Johnny Carson”, “Saturday Night Live”, “The Smothers Brothers Comedy Hour”, “The Dean Martin Show”, “Sonny and Cher” and “The Rolling Stone 20th Anniversary Special”. He appeared in TV dramas and movies, “Of Mice And Men” and “Starsky and Hutch”. As a composer/singer/actor, Ted also collaborated on music for and appeared in Academy Award Winning Director Robert Altman’s film, “A Perfect Couple”, “Blame it on the Night” and NBC-TV’s “Highway to Heaven”.

Ted gained renewed honors in the 1990’s tour of Jesus Christ Superstar, again with his dear friend Carl Anderson. During that extensive tour, Carl and Ted shared the stage with co-stars Syreeta Wright (Mrs. Stevie Wonder) as Mary and Dennis DeYoung of Styx, as Pilate. That production, “The A.D. Tour”, which was originally planned as a three-month, 20th Anniversary celebration of the film, went on to become the longest running non-stop revival tour in North American/Canadian theatrical history. While circling U.S. and Canada from 1992 to 1997, this tour alone awarded Ted with the unique opportunity of reprising his role for well over 1,700 performances.

In 2006, Ted was again asked to perform the title role in Jesus Christ Superstar Live In Concert for a very special one-night-only, Youth Theatre America Benefit in Hollywood. This unique event reunited dear friends from the Original Broadway and Film casts, Ben Vereen, Yvonne Elliman and Barry Dennen and it provided the opportunity for all to share the stage with the outrageous, Jack Black as King Herod. Immediately after this event, Neeley began another new North American/Canadian tour of Superstar. As before, the tour was set for three months, but the extremely positive audience demand and critical acclaim for the show was so great that it extended into 2010. Originally slated to reprise his iconic role of Judas, the internationally beloved Carl Anderson passed away in 2004 from leukemia.  On this tour, Mr. Corey Glover, the incredible lead singer of Living Colour, played that role.

In 2012, following years of sold-out stage tours, film and television work, Ted continued his childhood dream of singing in a Rock’n’Roll Band! He hit the road with “The Little Big Band” and the first stop was a benefit concert for the performing arts program at the high school in Lynchburg, Virginia where Carl Anderson began his career. For this event, the boys celebrated crowd pleasers from those great Rock Operas, Hair, Superstar, Tommy and Sgt. Pepper, along with original songs, and Ted told stories of his amazing journey through Rock’n’Roll space and time during his music, stage and film career.”

Quentin Tarantino invited Neeley to appear in his 2012 Academy Award Winning blockbuster film, “Django Unchained.” While on location in the Louisiana swamps, along with Jamie Foxx, Leonardo DiCaprio, Christoph Waltz, Samuel L. Jackson, and all of the supporting cast and crew, such a great time was had with Quentin and his incredible team. Ted looks forward to the continuation of that unique relationship with “QT” and the gang and the many possibilities for collaborating on future projects. Their collective experience in that unique atmosphere inspired Neeley for the “Tracker’s Chant”, which Quentin included in the soundtrack of the film.

In 2013, in celebration of the 40th Anniversary of the film Jesus Christ Superstar, Ted toured the US screening the new digitally re-mastered DCP print of the film. All screenings were presented in honor of their dear departed soul mate, the phenomenal Carl Anderson. The screening events included a pre-film discussion and post-film meet & greet with special appearances by all of the principle cast members including Barry Dennen (Pontius Pilate), Yvonne Elliman (Mary Magdalene), Kurt Yaghjian (Annas), Bob Bingham (Caiaphas), Larry Marshall (Simon), Josh Mostel (Herod) and the wonderful film choreographer, Rob Iscove, in select cities. March of 2013 brought Ted’s album, “Workin’ For The Words”, merging the raw and rootsy sounds of the American southwestern plains with the eclectic influences of a wider world. Then in August of 2013, came the new digitally re-mastered production of Ted’s original vinyl album, “1974 A.D.” Ted’s music is available on iTunes and his website,www.tedneeley.com.

Neeley’s latest EP “Rock Opera”, released in 2014, highlights selected tracks from the original Rock Operas, Jesus Christ Superstar and Tommy, along with unique vocal collaborations with long time friends and Superstar co-stars, Yvonne Elliman in their duet, “Up Where We Belong” and with Carl Anderson, featured in the reimagined “God’s Gift To The World”. The EP also includes an exclusive bonus track of an emotional live on-stage performance of “Gethsemane.” “Rock Opera” is available on iTunes and tedneeley.com.

In the spring of 2014, Neeley was invited to Italy to perform as Jesus of Nazareth in the Peep Arrow Entertainment production of “Jesus Christ Superstar”, at Il Teatro Sistina in Rome. Visually conceived and directed by the celebrated Massimo Romeo Piparo, the show featured the amazing Italian rock band Negrita on stage during the performances along with a 12 piece orchestra. Negrita’s frontman Pau played Pontius Pilate, along with Italian singer Simona Molinari (Mary Magdalene), and lead singer of the Italian band Roke’s, Shel Shapiro (Caiaphas). The show had such an overwhelming response in Rome, it went out on tour throughout all of Italy. During the tour Ted reunited with his film co-stars Yvonne Elliman and Barry Dennen for a special one-night-only performance in the historic 12,000 seat Arena di Verona on October 12th, 2014. The show sold out so quickly a second performance was added for that same night.

On April 27, 2015, following the Jesus Christ Superstar Italy tour, a unique gathering of the film cast and the visionary director, Mr. Norman Jewison was held in New York City for a One Night Only Reunion Celebration of this iconic film. With the exception of Carl Anderson, this was the first time they had all been together since they were in Israel for the making of the film. As the result of this remarkable evening, Ted produced the documentary “Superstars: The Making and Reunion of the Film” which features exclusive behind the scenes footage while they were on location in the Negev Desert in Israel along with recent individual interviews with the cast members and Mr. Jewison. The DVD also includes a bonus featurette of the New York City Reunion Q&A session with the cast members and Mr. Jewison. “Superstars: The Making and Reunion of the Film” is available at tedneeley.com and Amazon.com.

After a remarkably successful two year tour of Jesus Christ Superstar throughout Italy, the news had spread about this amazing production and the continued overwhelming audience response. Peep Arrow Entertainment and TEC Entertainment in Holland joined forces in taking the tour to more countries in Europe. Ted was elated by Massimo’s invitation to return once again, and this time expanding the Italian tour into The Netherlands for the 2015-16 European Tour. Continuing sold out performances, standing ovations and rave reviews brought Ted back to The Netherlands later that same year for Christmas 2016 at the World Forum Theater in The Hague, then on to Belgium and returning to Italy through the spring of 2017. On May 5, 6 & 7, 2017, Ted’s film co-stars Yvonne Elliman and Barry Dennen joined him upon the stage again for three sold out performances at the Rotterdam Ahoy Arena. Elliman, Dennen and Neeley performed a very personal and moving interpretation of “Could We Start Again Please” along with the entire cast, and rock orchestra. Sir Tim Rice was in attendance as the special guest of honor and joined Yvonne Barry and Ted on stage. It was an unforgettable experience for everyone.

The Rotterdam Ahoy Arena engagement was advertised as The Grand Final in the Netherlands and was in fact, meant to be so. As time and fate are not easily predictable, the remarkable passion on stage blended with the wonderful passion felt in the audience and grew into continuing standing ovations, creating overwhelming returning audiences, that inspired rave reviews. The combination of all these elements now brings “Jesus Christ Superstar” Back By Popular Demand to Amsterdam for Easter 2018 followed immediately by performances in Sofia, Bulgaria, then on to Barcelona and Madrid, Spain.

2018 brings Ted many opportunities. He is infinitely excited to continue this remarkable experience in Europe now beginning its fifth year! With Il Teatro Sistina in Rome being the beginning point and now the home of this on going, amazing Massimo Piparo Production, the deeply heartfelt pleasure of performing “Jesus Christ Superstar” throughout Italy is definitely on the theatrical horizon. Ted wishes to thank Massimo and his entire staff and crew, each wonderfully talented dancer, singer and actor in the cast and every powerful musician in the band for each unforgettable moment of this, our amazing journey together.

This June, Ted will head back home to continue the Annual JCS Film Screening Tour in select cities around the US. He then plans to return to Europe for another exciting leg of the Jesus Christ Superstar Live European Tour this summer and fall. Stay tuned…